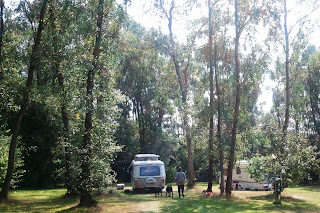 Here we were, in lovely woodland near Leicester last week-end, returned to caravanning after 20 years, beginning a calm and relaxing break after a difficult and stressful year. We both sighed with relief as we wound down the stays.  Just what we needed.
The site owners were really helpful and we'd met some friendly people in their vans, smiling and going about their business.  Even the late August weather was behaving, dappled sunlight through leafy branches.  All seemed idyllic. Then, unexpectedly, we were faced with a dilemma… a difficult moral choice.  What would you have done in this situation?
It was day three, we had just returned from a walk, with our two dogs, and had put the kettle on for a brew.  We sat outside in our chairs chatting quietly.  Then, we slowly became aware that, not far away, out of sight, a discussion was taking place between four of our caravanning neighbours.  One voice dominated but three more were chiming in.  All were in strong agreement and the volume increased.  We were now unwilling eavesdroppers on their hearty discussion. They clearly had no idea we could hear.   Their topic was immigration. From the need to rid the country of undesirables, through blowing up the channel tunnel, to  “What I’d do with Muslims if I were Prime Minister…”.  It got worse, then quieter, with occasional bursts of raucous laughter.  We sat through this, at first alarmed then aghast and finally deeply, deeply upset.  This whole experience was hurtful and, in a few minutes, it had ruined days away.  Two things stand out: that they had been so pleasant to us and that there was such agreement amongst them.  This was not a discussion, it was a group rant.  We discussed what to do.  What would you have done?
Well, in my professional life I write and argue for strong moral purpose and fairness.  I challenge racism, injustice and weak argument and often do so without hesitation and I do it calmly and confidently.  But here we were, deliberately away from “all that” to relax and enjoy some unstressed holiday time together.  So, in the end, to my shame, I did nothing.  I have had sleepless nights since.  Silence is not always golden.
I could have said something, even politely, “Excuse me, do you know that your views can be heard across the site?”  I could have added if I’d felt bold, “and not all of us who hear you, agree with you?”  But I, we, were Silent Witnesses.
Rereading this 10 years later, I realise this was a spur to later, obsessive challenging of such views and an evangelical attack on #SilentWitnesses who see and hear things but say and do nothing.
Posted by John Pearce at 11:40