Or, if I'm Frank I'm bewildered about what's happening.
However, my name is John and I'm a #WomanEdaholic, let me tell you a story...


A week ago (as I write this guest BLOG) I was preparing a 5 minute presentation for my first #WomenEd meet. I knew about #WomenEd, what it stood for and had decided it was the best place to share an idea I’d been mulling over for a while.  I was a nervous as the idea might be provocative.  I also worried I may not “fit in” or be “acceptable” because I would be seen as a meddling, little, old, man….  Friends I sounded out about the idea for the session were surprised.  One laughed, saying, “Wow you’re brave - 80 women on that subject! Do you expect to escape intact?” Guess the gender... It was Friday night banter, after a few drinks. Well, if I'm Frank, I'd say we all say things we don’t mean sometimes, or just blurt truths into our emptying glassware.

I made the presentation Saturday morning and judged it went pretty well based on comments made at the time.  The other presentations were excellent, colleagues spoke of the imposter syndrome, shine theory and how they’d been inspired by #WomenEd.  There was a breath of fresh, clean air and tangible energy in the room.  I went home, quite emotional and tweeted this BLOG on the talk and our experience.
http://jpearceconsultancy.blogspot.co.uk/2018/04/consensual-leadership-womeded.html

The six days since have been astonishing.  As the week ends, it has had 42K+ impressions and the BLOG has well over 300 pageviews and rising. My inbox has been peppered with affirming mail. All responses, from around the world, have liked, applauded and want more about Consensual Leadership and the associated PANINI CONTINUUM.  I am already writing more on that – maybe as an adjunct to iAbacus. 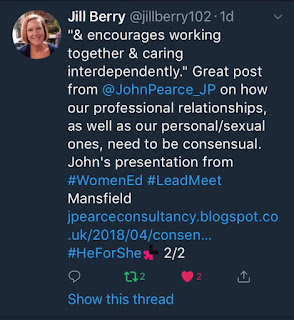 A week later I’m still a man, intact and strangely not feeling quite so old, or so small.  One reply meant a great deal, “You have a tribe. Your tribe has grown. You are very much part of the #WomenEd tribe and family John :-)  So, I guess, I’m in the induction phase as a #WomenEd #Brave who dares to be 10% brave and uses #HeForShe naturally. 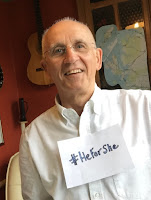 Midweek, the inspirational Hannah Wilson @HopefulHT, who introduced the #LeadMeet, asked me to write a follow up BLOG tweeting;

Thinking hard.. I wrote the title… and went a little beyond the brief....

In a depressing world #WomenEd and what strong women are doing, for us all, is a beacon of hope.  #WomenEd is so special because it manifestly changes lives.  On-line through #WomenEd links you can delve into Leadership, PSHE, Well-Being, SMSC, finding a moral purpose, nurturing wisdom, looking for common values and so much more.  All in the company of responsive and appreciative colleagues, mostly, but not all, women. Search #WomenEd and you’ll be immersed in stories, accounts, ideas and a real sense of a movement dedicated to releasing the wisdom within women… and men.

Take-away 2: In virtual reality, online, #WomenEd is a store of practical treasures.

Attending the Mansfield #LeadMeet, it was immediately obvious that the #WomenEd virtual environment was present in reality too.  It was a warm, friendly, inclusive and relaxed atmosphere. The group exuded camaraderie, care, fun and I felt at home.  Accounts of others, many women and a few men, testify to the same emotionally intelligent environment at other #WomenEd sessions they had attended.

So, Yes, Yes, Hannah, and all, I’m more than happy to state all this to encourage other #HeForShe advocates.

But it’s not the end is it.  It’s still the beginning... again Emily!  We have a long way to go.  And, anyway, who are the “we” here?  I have a nagging worry and imagine I'm not the only one (yep deliberate) and we need to discuss this… not sure yet how it will work out but I must, as a newly initiated #WomenEd #Brave, add some more provocative thoughts….  I’ll try and explain what I mean by recounting a true story about a significant cultural change, early in my long career – bear with, bear with…

I started teaching in 1970 and corporal punishment was well established in Secondary and Primary Education.  It was routinely administered by individual teachers, using a cane or slipper.  I hated it not just because I had been beaten badly at Grammar School.  On one occasion I had needed medical attention for purple bruises and deep cuts to my backside. I literally sensed it was completely wrong – full stop.

So, I refused to use the cane, on principle. Later, as a new Head of House in 1974 it was expected that I would cane, on behalf of other staff who wanted it administered for their misbehaving students. This was to end “heat of the moment” punishments that had previously been common in some classrooms. Cool, corporate efficiency being preferred I presume. I continued refusing to use the cane, preferring alternative methods of behavior leadership and, I believed, more effective strategies. This caused considerable debate in school and beyond. I should add that students in “my” Thoresby House behaved just as well and probably better than in the other three houses, where the cane was often used.

Here’s the point.  I was asked to run a four-session twilight course on Pastoral Care in Nottingham in 1974.  In the first session I floated this thought, “If we are still using the cane in the year 2000 it will be an indictment of the teaching profession”.  I intended it to be challenging.  It was. The Local Authority Course Leader, a “Headmaster”, later to become an Inspector I would line manage, called me over and, in some angst, said I was a maverick, told me not to return and took over the course.

Corporal Punishment was outlawed in State Schools, by the British parliament, in 1986. That was the year I published the book, "The Evaluation of Pastoral Care".

So, with that in mind I’m offering an updated cultural challenge to our profession. , “If we are still attending #WomenEd events in the year 2050 it will be an indictment of the teaching profession” Why? Because, if there is still a need to meet as mainly women, with a few #HeForShe men, we will have failed to ENTHUSE – INFORM – ENGAGE – INVOLVE - CONFER LEADERSHIP and so will not be able to LET GO… (Note the first public use of the PANINI CONTINUUM) 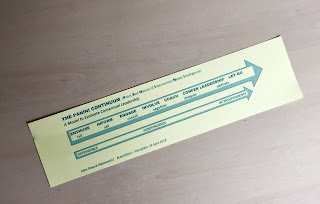 Take-away 4:
If #WomenEd exists in 2050 it will be an indictment of the teaching profession.

#Frank, my newly named, inner voice, is in conversation with Carly's Doris....

Frank:  I see those bolshy #WomenEd ladies are inviting men to your events… What’s that all about?
Doris:   NNNNNOOOO! What? Men will just…. Ooh No….they’ll just spoil it…. Mind you.. some of them might be alright… (Puts on Monty Python voice) Know what I mean? Nudge nudge wink wink!
Frank:  Huh, typical… Well, I for one, will certainly not be attending. I’ve better things to do with MY time…
Doris:  Well, you’re hardly eye-candy are you… Anyway, you wouldn’t be invited with your Neanderthal attitudes, leery tendencies and authoritarian behaviour… proper little Donald Trump you are…
Frank:  Fine…. Fine…. That’s fine by me…We’re all entitled to our opinions, right? But I get results, right? (mock Sinatra sings)  “I’ll do it My Way” (mock Trump adding waving little hands) “ Make Education Great Again….”  Seriously, it all went down the tubes when they banned the cane..… Never did me any harm, my love… Did it?”

She:  Men are very welcome to #WomenEd events of course… You know that?
He:  Oh… I thought it was just for women… It would feel like crashing… I’d feel people would assume I was virtue signaling… Isn’t the whole point that these are for women?
She: We understand if men are unsure – it’s just we welcome men who want to support women in their teams… you know the #HeForShes…men who want to learn the women’s perspective and help.
He: Hmm..I can see your point...OK.. I'll come... It's just that you - by that I mean “we” (pauses) Can I say “We”?  Whatever... #WomenEd will have to be so careful that that they…I mean we…. Don’t let in too many of the (draws inverted commas in the air) “wrong type” of men in and I suppose women too… Oh, help me here… (she smiles)
Oh come on! You know exactly what I mean… those men and women… the “machos” who… you know... just assume… who speak a lot… too much and… in the end take-over….
She: (Laughs) I know well what you’re saying… But I still think we need to do it. Maybe take it gently though… Slow but sure... We'll have to be prepared to call out any bad stuff - if it happens.  You know, model the kinds of behaviour we all want and need. We know we've got to be 10% braver and 10% stronger in preserving it… nurturing it…. spreading it…  It’s what we women are known for and good at… Urgh… Did I just say that? I should have said some men too… Like you I mean… I mean you too... Some men are doing this as well…you know...

I want to really END with a direct quote from a valued friend, Kevin Ford who wrote positively and at length after reading the “Consensual Leadership” BLOG. He is really liking the concept and ends with

“..... it all fits well with Alma Harris's work.... (silent "but") I remain suspicious of the binary division into male and female. Yes, we are biologically binary but both men and women are capable of the full range of human emotion and can move up and down the Panini Continuum as easily as each other. My tribe is male by biology and human by inclination. I don’t want to desert the bewildered men of the world because any consensual future has got to include us.”

Take-away 5:
How will #WomenEd educate “bewildered men” in order to become redundant?