Learnings from the Workshop

From the heart of the hearth..

Prompted by a friend who saw a photograph in my Blacksmith workshop, I decided to open up a cherished personal space to my teaching and leadership colleagues... 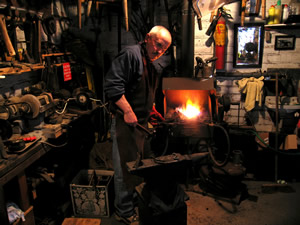 So, when asked to film the video as Keynote to the Academy Transformation Trust Training Day #STAFFDay on Monday October 31st - I did so. It just seemed right to make the links between what I have learnt in education, in classrooms and staff-rooms and also in my Workshop - where I retreat to reflect and review.  We've just finalised filming a piece with a subtitle: 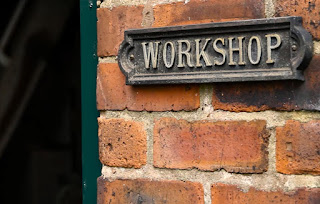 I was struck by how the links are stronger than I'd, initially, thought....

The first link is between the tools and methods we use.  I have old tools handed down for hundreds of years in my workshop and brand new ones too.  In education we also have old faithful tools and methodologies and always a range of new, shiny items to tempt us.  Some blacksmiths, teachers and leaders hold on to the old and resist change.  Others grab anything new just because it's new.  Whereas, the best in both professions evaluate and select the most appropriate and effective, for each job, proving them as they go. If a bad workman blames his tools, he should get rid of those that don't do task in hand.  If I had to choose my favourite tool from the workshop it would be my Ultimate Brace (Brass and Ebony Circa 1850) As a leader my favourite tool is, "learner talks first" (listen before acting).  I love both tools and use them whenever I can but I sometimes choose other approaches... just because a tool works in one situation it doesn't mean we keep on using the damned thing, "If your only tool is a hammer, you tend to hit things"? 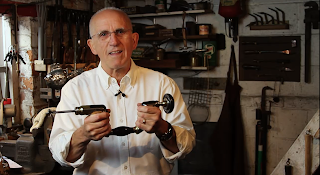 One thing that distinguishes the work of most Blacksmiths is that each piece is original, hammered out lovingly (yes you can hammer lovingly) on the anvil. Welded, filed, honed and polished into a unique form.  This is not mass-production and, whilst some make moulds to copy originals, it takes only few seconds to see and feel a copy is not the real thing.   It's so tough to keep to this belief in making originals - and it's a lousy business model... the original costs so much more than the mass produced copies. And so it is with our education system.  I often muse that we seem to prize the mass production of similar students, to a predetermined pattern, rather than take time to draw out, or allow the original to form.  The artist-teacher, she who prizes the individuality of her pupils, hurts deepest when the system appears to rewards the mass producer who turns out high numbers of the predetermined model. 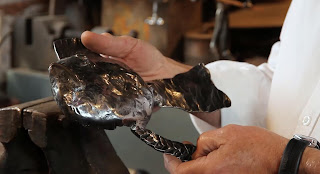 And what about the customers, the parents?  Are they losing the ability, and the will to detect the real thing? Don't the politicians go for the cheap, bog standard for the masses?  Ironically, there is a real danger that the system itself mitigates against the creative and original in favour of mass produced outcomes - reproduced time and reliably, time again...  I despair for the dreamer and creative mind, who wants to tarry, diverge or think as the are carried forward in a fast moving current of linear progression...

Metaphors we still live by

I love the metaphors we still use in our daily lives that come from the Blacksmith's Forge.  the fact that we temper metal for different purposes in the forge. To spring, or to bend, to be hard or to be soft.  Outside the workshop we talk about losing our tempers, our sense of control. Like the once strong springing beam we will bend loose in the heat of it all.  I still hear the phrase, "Too many irons in the fire" meaning she is trying to do too much.  This is worth extending for, as a blacksmith, I know that putting too many irons into the fire causes them to overheat and melt before I can use them...  How many teachers and heads are currently losing their tempers and melting because they simply have too much to do.  "If I could only speak quicker, write faster, stay up longer..."  The remedy is quick, obvious and easy to right in the forge - only a failing fool keeps using the wrong tempered steel and continues shoving irons in the fire.  But I still see hero and heroine innovators doing too much and getting over-heated and stressed, as I did once.
Their decline and loss of impact takes longer to show up but it is doing deep damage and is sometimes, later, too much to repair - see Superhead poem 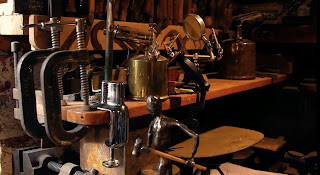 Now this BLOG must end positively. 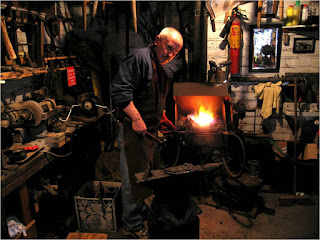 So, I'll end by hammering a point home... If you haven't yet found your Workshop equivalent - your thinking. creative time away - a pastime, or hobby - I say find it soon.. your professional work will be poorer without it.  One thing is sure - my Workshop has kept me sane for all my 46 years in education. It has always been my retreat, my place of solace. I always come away from it enriched, sweaty and dirty but with a real sense of perspective. I get a similar recharging from climbing mountains (By the way I'd be open to a commission for a Keynote Video filmed at the top of a Snow Clad Mountain!)   So I must end, as I always try to do, with a question for you.
Where do you go and what do you do to reflect, relax and gain a sense of proportion and perspective...  Answers on a postcard please

For the full Keynote video, the inspiration for this BLOG go to https://vimeo.com/189529123

Here are some taster videos I filmed about Learnings from the Workshop: