After reading Katherine Langrish's Brexit parody of the Jabberwock - I just had to add a few verses....

T’was Brexit, and the slithy Gove
Did gyre and gimble in the wabe,
All flimsy were the Faragists,
And the Rees-Moggs outgrabe.

Beware the squirming Gove, my son –
The lying tongue, the claws that catch,
Beware the frumious Boris bird –
Out for whatever it can snatch!

Who now will face it down, my son –
The Brexit-Beast with eyes of flame?
Oh who will seize a vorpal sword,
And cleave the monstrous thing in twain? 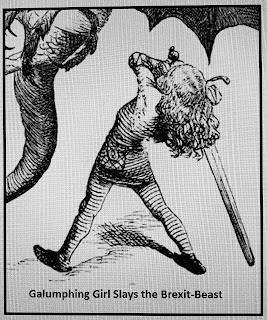 O horror that this Brexit-Beast
Has gobbleshagged with deadly strife
Beboggling the very weak and poor
Whose crosses gave it life!

One vote, then two! And through then through
Our vorpal blades will snicker-snack.
And all at once we’ll know
The House of Common Sense is back!

T’will be brillig in the Euroglades. O joy!
When the Brexit-Beast is dead and slain.
Gallumping girls and Beamish Boys
Will be Mimsy when we sway Remain…