The iAbacus - trains and beads and plans

Written in response to the comment, "Explain the iAbacus  to me simply and don't use jargon!"

When I was little, I loved pushing a toy train, making those "chuff-chuff  too-toot" noises.  I was in that train embarking on some epic journey. 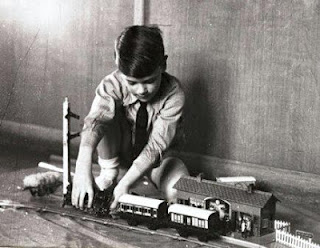 Later, I became fascinated by how writing left to right develops a story and saw handwriting as a kind of wriggly footpath. Tracing my finger along maps always gives me a buzz.   Maybe it's because I'm left handed, or left brained but left to right movement is somehow.... right.  I even called my poetry book "Desire Lines".  As a teacher, I would draw lines on the black-board, or move a bead along a wire, or piece of string to show progress.  Like the red in a thermometer expands, or speedometer pointers move, the visual representation made it real.    Once, as an adviser I used an old nursery Abacus as a tool, when I was urging colleagues to move on rather than sit there, describing inertia.  So, the "ABACUS approach" became three questions:  Where are you are now? Where you could be? and How you might get there?  Sliding an Abacus bead helps people talk about circumstance and actions to make things  better. There are are about five stages in the process:

Stage 1: Slide the bead, from left to right to describe how you are feeling.  Choose your own topic and labels.  Examples, far left to far right, include:  AWFUL to BRILLIANT; OBESE to FIT; BANKRUPT to MILLIONAIRE and even DEPRESSIVE to CONFIDENT. You can keep two labels, or add others in between. You could insert UNDERWEIGHT and OK between OBESE to FIT  for example.

Stage 2:  Describe each of your labels in more detail.  UNDERWEIGHT would be 140lbs (for me) and I'd show a holiday picture of you when I was a 10 stone weakling.  In the FIT description you'd list a few things you want to be able to do like swim a mile, climb a tree, or run upstairs. Or how you'd look.  You might have a photo of a film star but we have to be realistic...

Stage 3: Now you have to prove why you have left the bead where it is by providing information, facts, pictures, or something that shows you are right. So, if you are 20 stone you cannot, honestly, leave the bead on UNDERWEIGHT. Conversely, if your rings fall off your skinny fingers, or your best jeans fall down when your belt is on its last hole you can't claim to be OK.

Stage 4: Is about finding what makes things better, or holds you back from moving to the right.  If you want to be FIT you could say, "Eating fewer pies will help, or not going to the pub".  Someone who is UNDERWEIGHT might say, "Eating more pies." because we are all  different.

Stage 5: Write down what you are going to do, by when and how it will look when it's done.  Eating less and exercising is  vague so detail is important. Putting a lock on the fridge and giving the key to your mate might work.  Hanging up a new jumper that will fit, when you get to the weight is helpful, or a pie chart to tick the right number of pies for each week.  Stage 5 is about DOING something that will make a difference.

Stage 6 is really the second Stage 1 because you go back to the start, by asking yourself, as you look in the mirror, "How do I feel and look now?" Of course, you have those pictures to compare and you should be feeling better if you have done what you prepared in earlier stages.  Now, slide that bead a little closer to where you want it to be, a simple and powerful demonstration of movement.  Stage 6  should include a party with no pies, or lots of pies to celebrate. 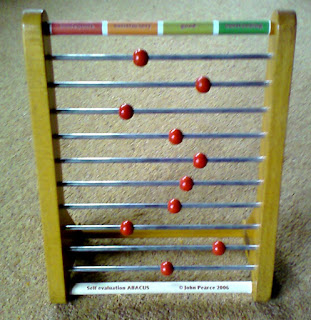 That bit on the left has a list of things she's working on - she's not doing very well on Number 5. 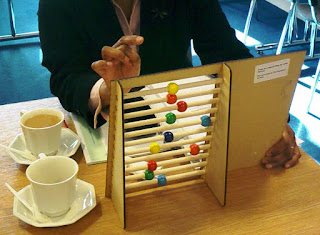 At this stage I was using an array of arty Abacuses.  It was working really well and I slid my bead to HAPPY.  I used it when I was coaching, training and consulting.  Folks liked it and it was THE most popular tool in all my evaluations by far but there were loads of forms and guides and lists and data alongside it.

In 2010,  I met "Dan The Software Man" and we started with an idea of using 21st Century Technology to make it slick and easy.  By the end of 2011 we thought we had a really good version, slip sliding away on screen.

I have a saying, "Start simple, it will get complicated anyway, start complicated and you don't stand a chance!"   We had listened to inspectors, quality control freaks and gurus and just loaded all their lists, forms and tick boxes into our computer because you can do that - they eat up that kind of stuff.

Our really difficult work began when we decided to take out all the unnecessary bits.  It was tough but the eAbacus, as we called it, became simpler to use and better to understand, less wordy and more brainy and by 2012 it was working just how we thought it might.  And then... something wonderful happened.  Using it we found it could do things we had never even dreamed of...

We could allow several people - as collaborators - to add comments and ideas onto a single abacus .  We could attach files and pictures (of film stars and pie charts) and even all those dense (do I mean detailed?) reports the inspectors and quality controllers had written could be appended.  Then we found we could put all the little bits of information from the 5 Stage sequence in order and slot in coloured pictures of the beads in one place and produce comprehensive and detailed reports.  These are even better than those the quality controllers, the consultants and inspectors produce.  And the whole process is done on screen, we don't have to print one piece of paper, at any point in the process.  We  just email reports to each other.  Our maxim is "Print less well, rather than more badly" so, if you do want to print one copy of your final report when all your work is done and things are better - just click the print button. 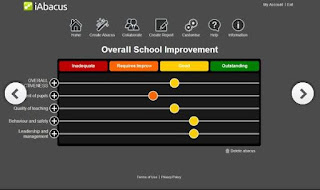 Dream first and then write lists


The thing I am most proud of is that the  iAbacus still starts with sliding that bead - from left to right - the genesis of the idea.  I don't want to be negative but so many systems  START with evidence, data and information - the boring but important stuff that buries us to the depth of meaningless.  It has always seemed  far better to start by dreaming about what could be and setting the compass first.  Writing lists, working out average speeds, fuel consumption and cost per mile can come later.  And they are far more interesting when you know where you are going.